If you’ve been around indie publishing as a reader or an author for longer than a minute, you’ve seen the phrase “drama llama” with accompanying picture of a poor, defenseless animal who didn’t ask to be drawn into our human nonsense, okay? 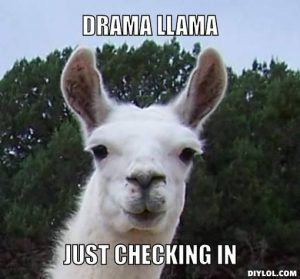 To me, the phrase and the abuse of the word “drama” has less to do with the subjects and people labeled “dramatic”, and more to do with weaponizing the word against legitimate complaints – and the marginalized people who lodge them.

At one point in my life I was an actress. I learned how to leverage emotions for the purposes of spectacle and entertainment. I learned the beats of speech, when to pause, and when to give a word the full weight of my voice.

And I learned that often Comedy is the same animal as Tragedy from another angle. The intertwined masks of crying and smiling faces symbolize this duality in theatre. Joy and pain are just surfaces of the same coin, a coin used to show an audience universal truths hidden in plain sight.

Part of what makes those truths so powerful is that we are seeing them within the context of a lie. Safe from the spotlight that is turned on us in life, we take a break from musing on our own shortcomings and center others for a few hours.

Drama is powerful. But like most powerful things in life, when people don’t understand it they can twist that power around until it’s a shadow of its former self.

In those situations, silence isn’t the consensual hush that befalls an audience, but a cage that shushes complaints.

It’s an effective way to gaslight someone, too. Tell the person you’re trying to shut up that they’re being dramatic. If they’re insecure, this may do the trick. What was an outward expression now becomes an internal debate that the shamer can excise themselves from. “Am I dramatic? Am I making a big deal of nothing?” Maybe. Or maybe you have a valid complaint the other person doesn’t want to examine closely. The mileage varies. But the effect of drama shaming is that we often don’t get to evaluate on a case by case basis. Instead, we fear becoming labeled a certain word and do the work of silencing ourselves for the offending party. We’ve been conditioned to see emotions, intuition, and our own conflicting ideas about ourselves as the enemy, and not silence.

Which brings me to the point of this post.

“Drama” as it is used now, is not a rug you can sweep legitimate complaints under. Some shit is serious and requires thought. And discussion. Memes can only get you so far. Peace and love and safe spaces are wonderful. But sometimes confrontation is what you need. Sometimes it’s not about centering your own comfort, but about turning the spotlight around and seeing things from another angle.

Yeah, that’s right. I said it. Confrontation can be healthy. Good for us even. Especially in an industry like indie publishing, which evolved out of a need to no longer be silenced by the mainstream.

We have to stop patting ourselves on the back for avoiding drama, like it’s some cookie we opted out of eating in favor of kale.

This isn’t about fiction either. I respect the art of bending issues into narratives for the purpose of entertainment, and I fully support people who don’t want to go to the dark spaces fiction can illuminate. But when we close the book and turn off the movie, we should be able to engage critically and empathetically with real live human beings, rather than avoid them and their troubles. 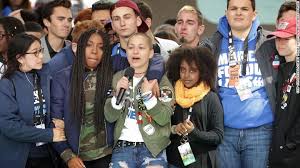 The Parkland shooting victims, with opponents of common sense gun laws going so far as to label the teenage advocates “crisis actors”. Never mind that these were proven victims of gun violence, and that our emotions should be manipulated to the point of discomfort when children are dying because of our inaction. Discomfort is code for change, after all. So rather than feel, advocates for the status quo point to the lights and the cameras and call this “drama” instead. Until another shooting happens, like it did at the end of last week. Each one is met with performative and muted responses by our government, the NRA, and their supporters. Each time, there’s an appeal to logic. Admonishments for politicizing tragedy. And a call to hold off on debate until we’re all being just a little less… well. You know. 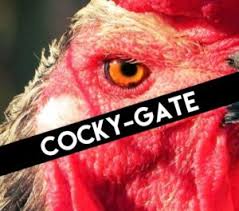 Cockygate was at first dismissed as just another romance publishing issue until the layers were peeled back. Once publishing at large realized how bad trademarking the word “cocky” could be for everyone in every genre – and not just authors of color like Jamila Jasper, who Faleena Hopkins targeted with her fraudulent trademark complete with stolen font – it became a threat to words as we know them. Legal professionals got involved. Legitimacy was granted with the involvement of heavyweight publishing organizations like Romance Writers of America (RWA), who got their legal departments involved to head off any threats to their business interests. Once men like Christopher Rice called for widespread attention, it was impossible to ignore.

The initial coverage of this was a typically sexist blunder the likes of which romance authors are all too accustomed to.

But some got it right:

Two thoroughly researched articles out today that tell the story of what it was like for some people getting these notices. First from @TylerAKing at Slate, with interviews of @JamilaJasper, @clairekingsley1, and yours truly:
https://t.co/bQUFLOwprT

The embarrassment of the outside world casting light on this stage caused this issue to be seen as an infringement on our rights, as human beings and artists, rather than one of “bullying” and “drama” – which are often dismissed as infantile, catty, or feminine, making it all too easy for the mainstream to dismiss. A very real issue that threatened people’s livelihoods was treated as gossip at best, and as a road block to readers enjoying books at worst, until enough people kicked up a storm and refused to be quiet.

And yet some Facebook blogs and Facebook groups predicated on helping indie authors navigate the rigors of publishing, enforced silence so as not to get involved in the “drama”. Silence imposed to keep the status quo in check.

Any time publishing is forced to face the implications of racism (such as with the recent debate regarding RWA and the lack of black authors acknowledged for their contributions), the effected parties are accused of stirring the pot and making everything about race. “Drama” is what racism is called. And when verifiable proof is offered that racism in publishing exists, this strange Groundhog Day-level shock sets in, and much ado is made about how to fix it without actually having to change anything about ourselves. Like our spending habits, our ideas about race, where we put our marketing dollars, or how we approach reading as a pleasurable medium for entertainment at the expense of the knowledge, discomfort, and pain art can provide as a tool for growth.

Yes. It is racist. The whole Western world is navigating the disease that colonization and chattel slavery left behind. Not to mention sexism and sparse LGBTQ+ representation. But what now? And how will we combat this truth in the little but meaningful ways that fix this for future generations?

Last but certainly not least on my mind, are the exploitative authors looking for quick cash and fame at the expensive of their peers and beleaguered audiences. This is the genesis of Cockygate, the issue with Kindle Unlimited being scammed out of millions of dollars by book-stuffers, and an assortment of other scams meant to make people feel like big name writers without doing the hard work of writing compelling stories. The hunt for bestseller as a business badge, rather than just a thing that can happen if you sell a lot of books, has crippled the market and helped lead the way for Amazon’s eventual monopoly over indie publishing. But to those looking for short term gains at the expense of other writers and dissatisfied readers, they’d rather we call these complaints drama. It must be jealousy, or a desire to bend the industry to one group’s whim, rather than a long and arduous trek towards inclusion, fair play, and better books.

Logic has long been touted as a masculine and thus more reliable trait. Drama is shamed for strumming emotions in us, because intense feeling can sometimes be the precursor to action. So what I see more and more is a call for passivity. A call for logic, a call to “grow up”, to stop inciting the “d” word, and to even pretend we don’t see things that are plainly cast in bright lights, lest we be shunned.

And yet we use drama to hear and be heard, to see and be seen, especially as artists.

How then, has this become a word used to shun people who effectively draw attention to important issues? And how has the word been bastardized to the point where we use it to silence dissension in favor of a false peace?

I don’t discount we all overreact from time to time, that while our feelings are valid they can also be subjective. Sometimes we need the mirror of other human beings to look in, the same way Comedy needs Tragedy. Sometimes we take ourselves too seriously, blow things out of proportion, and become performative for attention. Sometimes we think we’re the victim and we’re the abuser. Those are valid issues that need to be addressed, because they are manipulative and cause harm in their own ways. But you don’t come to those realizations in a vacuum. You come to them through discussion, through engagement with other ideas and people, and through consuming art that in some cases shows you where you can be the hero, and where you’ve definitely been the villain.

I’d like to think that at some point, everyone will grow so tired of the concept of drama = bad and insincere. I hope we’ll stop waiting until someone with more clout repeats what we already know, and instead listen even when the actor performing the latest “drama” is just a bit player. I hope one day we’ll do a helluva lot better, as people and as artists.

I have an optimistic streak, after all. Just the one streak though, that’s why I wasn’t in musical theatre. That and my weak jazz hands… 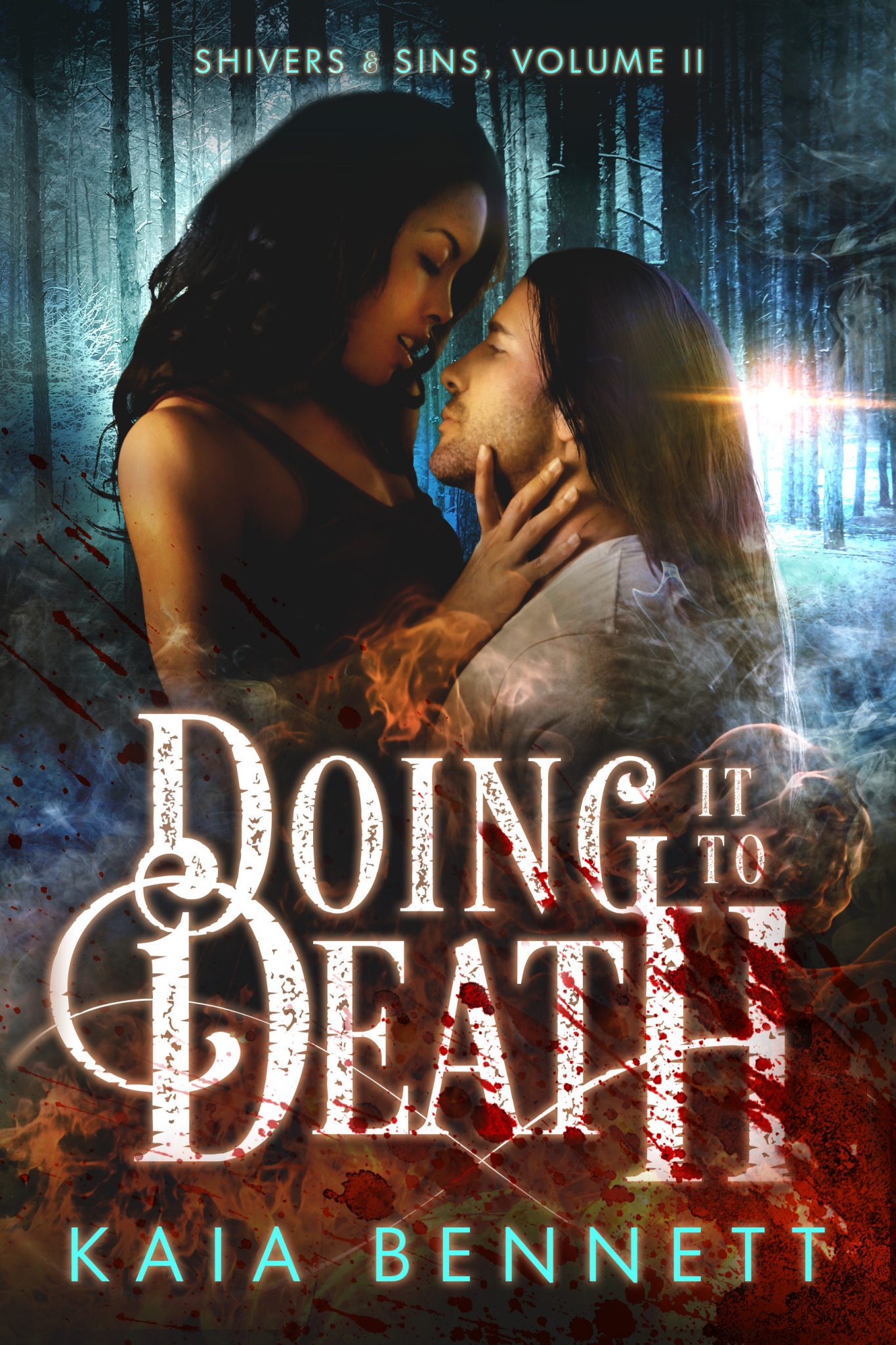