Virtue, vice, and everything nice in the form of a nearly done draft. We’re not there yet, but I’ve stopped scrapping whole scenes. I’ve stopped doubting my trajectory and feeling like I’m wasting time. More days than not I smile because maybe When Dying Is Done could be something beautiful. I can finally hand it off to my editor in August.

Sometimes writing feels like a vice when there is so much going on in the world, so many other responsibilities and realities competing for time and focus. Unless you’re one of the lucky few who can afford to do this full-time, you can sometimes find yourself asking what the point is. Why bother? I always find the answer to that question in the work. I bother because I’m compelled to, because I’m a writer no matter what. Even if it can’t sustain me on it’s own just yet, this is my chosen profession.

A couple of days ago I saw this tweet and man did it come at the right time. 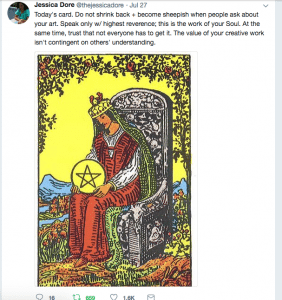 It’s something every writer learns eventually. No matter what you do, no matter how well you think you walk the tightrope, the work put into characterization, research, editing, laying trails and tightening threads, the only constant is miscommunication. Why bother when some just won’t get what you were trying to do? Why bother when the book can’t be as perfect as your imagination? Because you’re compelled to write. Because you understand what you’re trying to do, and it’s practice to do even better next time. To get it right in a way that feels right to you, even if you fall a bit short, is better than never trying at all. If you don’t quit, there’s always another chance to ask the question, “Why do I even bother?” and answer it during the journey that is your next piece.

Translating what’s in your mind onto the page means some things will get lost along the way. Go figure. It’s an art dedicated to communicating, to illuminating our thoughts. But what is communicated and illuminated once the text is out there depends on the reader. They won’t always understand or see where you’re going… but I think that’s the beauty of it. It’s not a given. Some will see where you were going and what you tried to do. Some will see things you didn’t see yourself as you were writing the story.

I’m fine with any of these outcomes for the reader. I’m more interested in controlling myself than the responses to my work. What vexes me now is time, patience, keeping the secrets I’ve been holding close to my chest. You see, aside from The Fifth Day, Shivers and Sins is the only story I’ve published to date that hasn’t been written as a free serial for an audience first. The longest I’ve had to wait for people to see me play my hand before this was a few months, and that includes writers block when I was writing what would be the final book of Loose Ends. The benefit is that I can take my time and do this right before anyone ever sets eyes on it. The excerpts are unedited and so subject to change. It’s a bit harder to edit when the story is set in stone, though. There are things I might have done differently with my previous works if they weren’t already set in readers’ minds as free serials.

Patience is a virtue, but I’m writing about sin, lol. Some days they don’t really mix. Yet, when you’re writing a book like When Dying Is Done, they at least have to be acquainted. The longer it takes to smooth out the rough edges of this book, the more I have to channel the virtue I’ve been at war with my whole life. My mom will tell you, patience is not my virtue. There’s a lot I want to fit into this book, and yes, it will be long. It’ll be long in part because I have to end this arc solidly, and it’ll be long in part because it has to set up new stories going forward in this series.

Sometimes the hardest part is staying the course in the face of reader expectations. Or rather, in spite of them. Some people think they have Jesse pegged for example, because he spent Doing It To Death cursed and navigating his world and his life through the lens of that curse. It’s the same for Die By the Drop. Some thought it was all misery with no discernible destination. Sex, violence, death, rape, torture, death, road trip. A few twists and turns. The end. That was just the beginning for me.

So if you’re out there writing and you’re trying to figure out what the hell you’re doing, you’re not alone. Give yourself time to answer your own question. Because there are days when writing feels like rubbing a cheese grater against my brain. There are days when I’m blocked and have to journal myself out of a hole, which takes time. There are days when it’s all flowing so smooth I wanna name my WIP Butter. There are days when I want to scream, “I have a brilliant fucking idea!” to the world, but instead I just gotta write it down. And oh, how it hurts when I hit that high and the next day the high is gone. It’s like seeing sunlight in the eye of a storm. I know just what I’m missing as I’m driven back into chaos.

This time last year I was spinning my wheels. Today I know for a fact that the story I’m writing will be better than I ever thought possible. There are just some things I would not have stumbled upon if it was done months ago like I planned. Threads I didn’t know I’d laid in the first two books are staring me in the face now. But I needed time to get here. I needed to trust myself, and think it was pointless some days, and then say “fuck that noise” and write a scene.

I’m about a three-quarters of the way through this draft. I’m writing an Evie and a Jesse that are true to the vision I had for this series about life, death, pain, and transformation. I’m writing characters that I don’t think anyone knows, including myself, because they are unraveling in front of me. My goal is to finish what I started and start again. Not to make you understand. That’s just a hope of mine, a wish.

So. August. That’s when the draft gets done and turned over to my editor. From there she’ll let me know if it’s shit, lol. The last few days I’ve drifted between thinking it’s gonna be magic to thinking, “Why the fuck do I bother?” But I’ll figure it out with a bit of patience and some understanding. The answer is in The End.