Here it is! The cover for Mind Over Matter, the final book in the Loose Ends series!!! It’s now available for pre-order and you can add it to Goodreads! 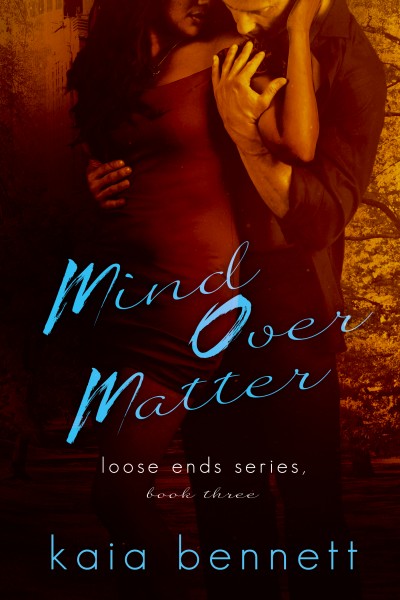 Thank you Najla Qamber Designs and The Reed Files for the beautiful cover art!

But when the mistakes of Gabriel’s past clashed with Nicole’s hopes for the future, they realized love wasn’t enough. They tied up the loose ends of their broken hearts and walked away.

Now, Gabriel’s career is on a meteoric rise and he is back to his bachelor ways. He told Nicole he couldn’t promise forever and did his best to let her go, but these days he wonders if he spoke too soon.

Nicole has a new life, a new man, and she refuses to look back. To everyone around her though, not looking back looks an awful lot like running scared from the past.

With Jackie and Ian’s wedding approaching, a reunion between the best man and the maid of honor is to be expected. What they don’t expect is for the olive branch of friendship to catch fire with a love and need that is stronger than even their best intentions.

They called it quits. But is it really over? They still love each other. But does that even matter when they’ve made up their minds that there’s no going back?

*NOTE* Mind Over Matter is the third and final book in the Loose Ends series.