Die By the Drop (Shivers and Sins: Volume 1) – Cover Reveal and Excerpt

But you know that’s not all I have to share, right? It’s also time for an excerpt!

But first, a warning: This story is not like the others I’ve written. It contains copious amounts of violence, sex, a merging of the two, and non consent, all within the context of a paranormal setting. I’ll talk about that more in another post, and again when it’s time to publish. If that’s not your cup of tea I totally understand. But if it is, then you might enjoy the rest of this post.

Chapter One is here, but if you want to read the first SIX CHAPTERS, all you have to do is SIGN UP FOR MY NEWSLETTER. I swear I won’t spam your inbox. I only send newsletters when I have something to share about my work or awesome deals where you get to stuff your e-reader full to bursting.

I’ll send it as soon as I get everything cleaned up in a few days. And please feel free to leave feedback if you like, it’s always appreciated.

Hope you enjoy and thanks for all your support as I work to get DBTD edited for a tentative summer release! 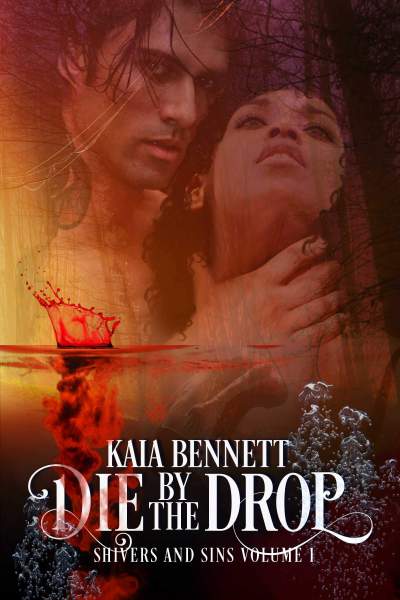 I’d fought to lead a normal life, despite being anything but.

Until the night three monsters forced me to fight for survival instead.

They turned a short walk through the woods into the road trip to Hell.

The leader made me his, made me dread pleasure and relish pain. Made me want things I’d once feared.

They wanted to break me, bleed me drop by drop.

They picked the wrong witch.

It wasn’t the chill that rattled my bones, but the knowledge didn’t stop me from blaming my shivers on the cold as Manny tore at my clothes to expose more skin.

“You alright?” My boyfriend of two-and-a-half years shoved my jeans down my hips without waiting for an answer.

“I don’t feel so good.” I sensed movement in the trees surrounding us, belying the eerie stillness of the night. In the distance, a bonfire crackled, the pungent smell of smoke tangling on the wind as music blared. I felt trapped in a bubble of deceptive calm. Silence, the kind that prevails when animals flee, thickened around us.

Manny didn’t seem to notice. He shoved cold fingers between my legs and rubbed my dry flesh.

Never mind, his huff seemed to say. The condom had lube on it. He gave me a sloppy kiss while he rifled through his jeans pocket for one. I knew what came next. He’d turn me around, shove me up against the tree, and fuck me from behind like so many times before in these woods. Maybe the tree he braced me against knew the press of our weight, the sound of our moans. Maybe my fingernails had etched this bark during the throes of ecstasy.

Tonight was different, though. Tonight I couldn’t ignore who I was—what I was. I couldn’t pretend everything was fine.

He sighed and took a step back. “What’s going on with you? You’ve been acting weird all fucking week, and now, we finally get a chance to be alone and you’re not up to it?”

Shock flared in Manny’s eyes. I’d never spoken to him with disdain. Guilt blew out the flame of my anger and nausea doused the embers.

“I don’t know what’s wrong with me,” I whispered to the night air. My stomach flipped and I bent to dry heave. Manny leaned over to push my hair aside.

“You didn’t have too much to drink, did you?”

I shook my head and regretted the motion. “I couldn’t even finish that beer. Fuck, I want to go home.” Tears stung my eyes.

“Is this like one of those episodes you had when you were a kid?”

I grimaced and righted myself, swiping my forehead with a sweaty palm. “You mean, before I got admitted against my will to a mental hospital? One of those episodes?”

It’s exactly like that, but I’ll be damned if I tell you the truth.

Manny had the decency to look ashamed for bringing up my battle with mental health. I never talked about my admittance into Tremaine Behavioral Hospital after my cousin Nora’s death, but he knew. Everyone in our small suburban town knew. My past hung over me like a cloud. I’d cultivated a new image since then, my dark past fading, mostly blending in with the white fluffy clouds surrounding the fictional life I presented to the world.

But still, every once in a while, if I looked too emotional, if I didn’t smother melancholy before anyone saw, my loved ones pricked up their ears, listening for the first hint of a storm. Always, there glowed a touch of gray in me, a rumble of thunder buried deep within. I’d spent years burying my volatile nature, but I couldn’t dig the hole deep enough so that people forgot I’d been unhinged once. Small towns have longer memories.

I leaned back against the tree for support while I tried to make myself look strong. “I’m not having an episode. I’m not crazy.”

“I know that. Just talk to me. Tell me what’s wrong.” Manny stroked my overheated cheek with cool fingers, gentling his touch the way he did before kissing me.

I wanted to tell him, I’d come too far to turn back now. The girl I used to be, the one who’d screamed and cried and suffered nightmares just before Nora’s death? She died as soon as I got my clearance papers from the hospital. I’d killed her.

I am normal! I’m just sick to my stomach and need to get some rest. I’m not crazy. And even if I was losing my mind, I’d die before I told another living soul. Never again.

“Nothing. I just don’t feel well.” The lie worked. Like flipping a switch, he returned to exasperation.

“We just got here, Evie. And Greg? What am I supposed to tell him?”

Greg—Manny’s best friend since pee-wee football—shipped off for the Army tomorrow. We’d come to a bonfire to celebrate his last night in town.

I’d never been a big drinker, so I agreed to be the designated driver. I’d completely forgotten, and now, I regretted my promise

Manny wavered before my eyes, but I blinked my tears back. I swallowed. A shiver wracked me.

Get it together, Evie. Just grin and bear it for one night.

So much for my pep talk.

He shoved his dick into his boxers and zipped with more force than needed. “I’ll walk home.”

We were only about a thirty-or forty-minute hike from our hometown of Guthridge, New Jersey. No sweat for a man built like an NFL quarterback, but I still didn’t like the idea. Not tonight. Not in these woods.

“So you’re gonna walk home drunk and then get up for work tomorrow afternoon?”

“Well, that wasn’t the fucking plan, was it?”

My stomach roiled. I needed to concentrate, push away his anger, and stay calm for both our sakes. I focused on the relentless tingling in my fingers. I clenched and unclenched my fists and shook out my hands, but they wouldn’t stop shaking.

“Just give me the keys, Evie. I’ll drop you off at your place, then come by later to drop off your car.”

“You’ve been drinking!” I protested. “By the time you’re ready to leave, you’ll be drunk. I’m not letting you drive.”

His jaw clenched. That wonderful, square jaw I loved to kiss. He rarely got mad at me, and I had ways of making him forget his anger. None of which I felt up to right now.

I growled and stuffed my hands into my jacket pockets. “Call me when you’re ready to go, Manny. I’ll come get you.”

He huffed and shook his head.

“Whatever.” He turned and stormed towards the party.

“Nice, babe. Thanks for being so understanding!”

“Fuck you!” He spun on me. “You’ve been acting like a selfish bitch all week, so you might as well go home. It’ll be more fun without you here. I’ll tell Greg you said ‘bye’.”

I screamed in wordless frustration and slapped the bark of the tree.

My palms stung and I cursed my outburst at an inanimate object. Manny’s softer face would’ve been much more satisfying against my palm. I turned on my heel, outrage propelling me in the opposite direction.

No, fuck you! Motherfucking sonofabitch!

Damn near three years of being unselfish, and one off week was all it took for him to treat me like gum stuck to his shoe?

Fine. I hoped he was ready to get a piece of my mind tomorrow. His ears would bleed by the time I finished with him.

Underbrush snagged my ankles. Branches smacked me in the face while I stumbled on the slippery pine needles, damp leaves, and moss.  Even the damn trees had it in for me.

I just needed to find my way to the path.

Just get back to the car and this will be—

A chill licked the nape of my neck. Reaching to touch the spot, I’d swear I touched a wet trail—the sort left by a tongue.

Of course, there’s nothing there, stupid.

Only evergreens and birches, darkness, and the fading sounds of the party beyond.

But the sickening wrench in my gut—the feeling of something tracking me like prey—only worsened. For a moment, I thought of turning back, sucking up my pride, and apologizing to Manny. Instead I picked up the pace, lengthening my stride.

A snapped twig echoed through the night. Booming laughter gave me a fright so fierce, I spun around again, slipped, and almost fell on my ass. Inky blackness blanketed the woods, broken only by streaks of moonlight in the gaps between naked tree limbs.

Some sixty feet away, a man stood in plain sight.

I made out his masculine build. His imposing height wasn’t disguised by the easy hunter’s crouch he assumed. Moonlight refracted off his predatory stare, triggering my flight response. Adrenaline pumped through me.

“My boyfriend is out here!” I retreated, first one tentative step, then another. “So you should go back to the party and leave me alone!”

The man tilted his head. He took a deliberate step forward.

“You’d better stop fucking off before I scream! My boyfriend won’t think this is funny!”

Even in the dark, I spied the gleam of white teeth. The blazing flash served as my only warning before he took off at sprint so fast I tasted my heart in my throat.

I pivoted and scrambled for the path, screaming so loud my voice echoed in my ears.

My desperate cries almost drowned out my attacker’s laughter.